After ten years of revolution, political instability, hyperinflation and the burden of onerous war reparation payments, Germany began to enjoy a degree of economic and political stability by 1929. The country’s future, for the first time since the early World War I years, looked promising.

The Wall Street Crash Of 1929 put an end to that promise.

The effects of the Crash began to be felt in Europe by early 1930. By 1931, European economies were in full-fledged crisis.

Germany was especially hard-hit, as the country was required—despite the fact that Germany's economy was on the verge of complete collapse—to continue to send billions of marks overseas each year as part of its post-war obligations.

The situation was ripe for the populace to turn to radical measures—which, in time, was precisely what happened.

The photograph below depicts unemployed dockworkers at Hamburg’s harbor in January 1931. The workers are milling about, waiting for the unlikely prospect of day work. 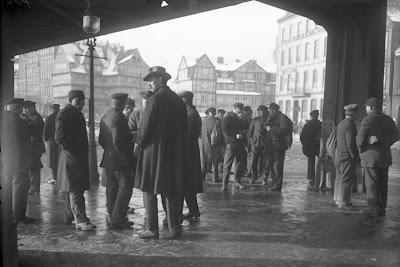 By the summer of 1931, bank panics were the order of the day throughout Germany.

The photograph below shows anxious crowds of depositors outside a Berlin bank in July 1931, waiting to withdraw their money. In the U.S. of 1932 and 1933, the scene would have been called a bank run. 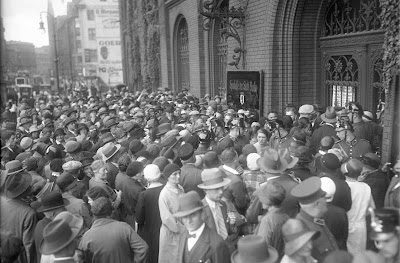 Unemployment in Germany skyrocketed in 1930—and continued to rise sharply throughout 1931 and 1932.

The photograph below shows an unemployed man in 1931, his meager belongings in tow, sitting on the entrance steps of a Berlin commercial firm. 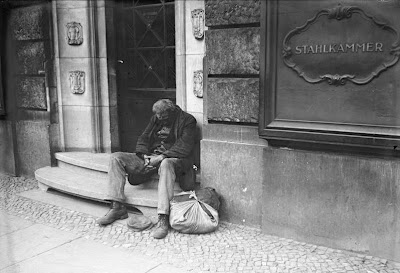 By 1931, there was no longer any effort on the part of police to prevent the unemployed from loitering near business establishments—a grim sign of how bad the situation had become.

Charitable efforts were widespread throughout the country, but they were insufficient to address the depth of the problem the country faced. Germany was dealing, not only with an army of unemployed, but with countless disabled war veterans, all of whom required assistance.

In the photograph below, from October 1931, a charitable organization collects donations in Berlin for the unemployed and the war disabled. 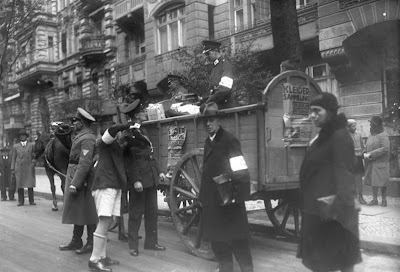 The horse-drawn wagon, a jarring sight in a major metropolis in 1931, looks out-of-date, out-of-place and positively pitiful—and the charitable workers look as if they are themselves as much in need of assistance as the persons for whom they are collecting.

Bank runs throughout Germany continued to be a daily occurrence until March 1933—when, as in the U.S., they finally ended with the installation of a new government and new banking measures.

The photograph below shows yet another run on a Berlin bank in November 1931. 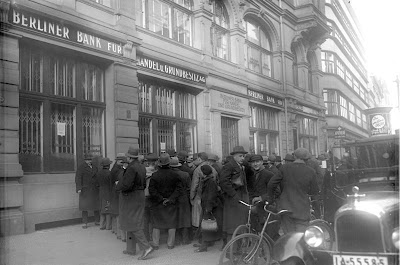 Eminent German financial institutions that somehow had survived the immediate post-war years, and all the crises and privations those years entailed, were unable to survive the aftermath of The Wall Street Crash. By 1933, the state-created Reichsbank, established in the 19th Century, was the only large financial institution remaining in Germany.

In times of crisis, or in times of great despair, people turn to solutions that, in normal times, would never be thought possible.

One of the results of the October 1929 Crash was the rise of Hitler, who within forty-one months after the Crash held Germany firmly in his grip.
Posted by Drew80 at 2:07 PM

Drew80
I am a lawyer, born and reared in the Twin Cities. Family is everything to me. My mother I adore and my father I worship (my father is also a lawyer). I have two older brothers whom I love dearly: one, 39, is married and has a young son and daughter and works as a financial analyst; the other is 36 and single and works as a civil engineer. My brothers and I were dispersed for years while being schooled and while establishing careers (Boston, Palo Alto, London, New York; Ames, Fort Collins, Denver; Princeton, Vienna, Washington, D.C., Boston), but we are all home now—and, it is my hope, we are all home for good. The newest member of my family is Joshua, whom I met in Washington while I was in my last year of law school and while Josh was in his last year of undergraduate studies. We immediately became inseparable and have faced the world together practically from the day we met. We have recently returned to the Twin Cities from Boston, where Josh gained his Juris Doctor. We have many interests and participate in numerous and diverse activities, yet we are mostly homebodies, playing sports, reading history tomes (and passionately discussing them) and spending time with family.